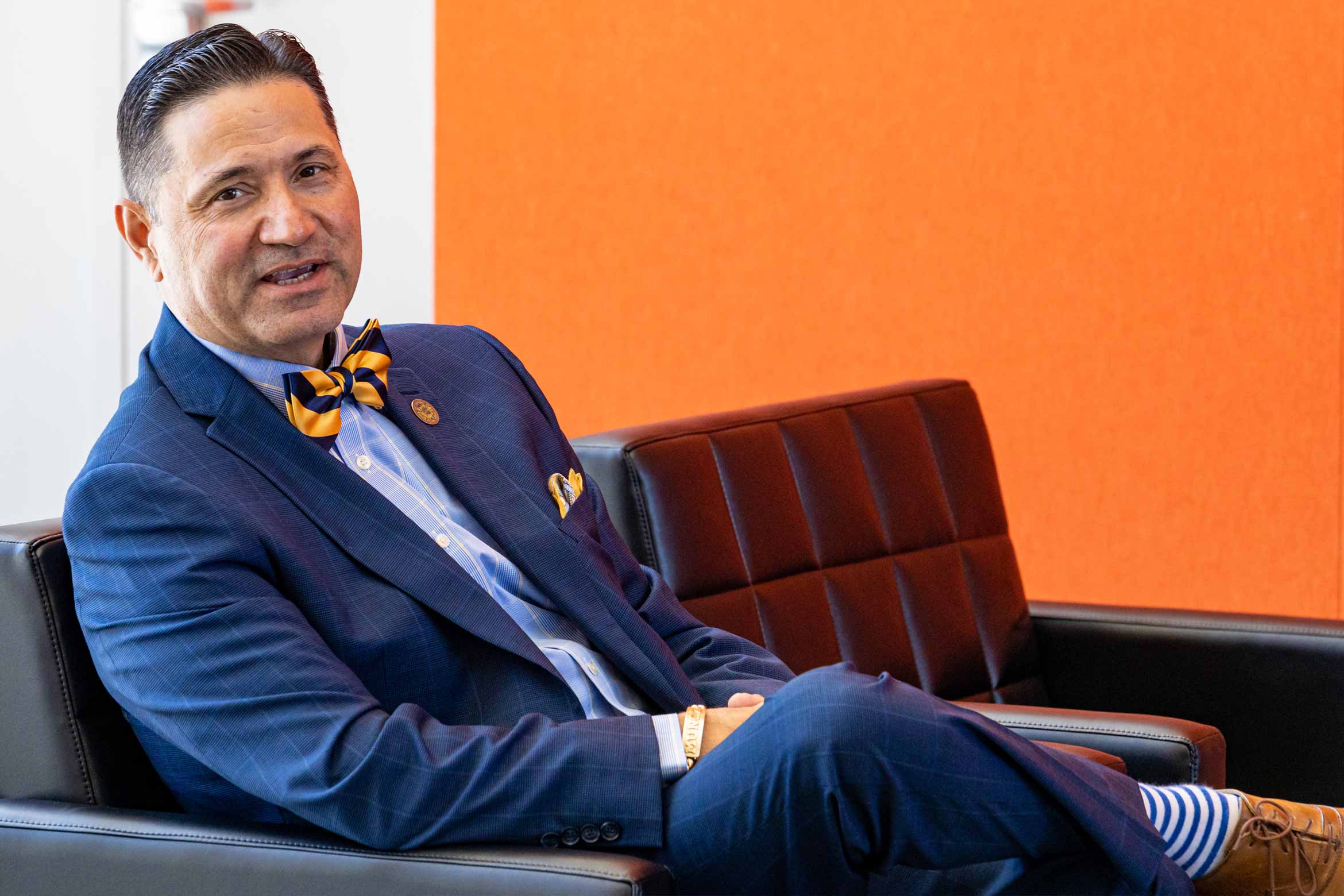 On the surface, the arrival of Juan Sánchez Muñoz BS ’90 as the fourth chancellor of the University of California-Merced might have seemed fairly normal: sunny June day, tour from outgoing interim chancellor Nathan Brostrom, visit to downtown Merced with the city’s Mayor, Mike Murphy.

Yet Muñoz had accepted the job without having ever set foot on the school’s campus and he found a school that, despite the largest class enrollment in its history, was operating at less than 10% of its residential capacity of roughly 4,000.

Here he was, brand new to the role of chancellor, coming to lead a university he had never been to before, during a pandemic posing the most significant challenge in its fifteen-year history. And yet, there was something recognizable about this situation and even this place. A seasoned higher education administrator, Muñoz was serving as president at University of Houston-Downtown in 2017 when Hurricane Harvey wreaked $125billion worth damage and submerged 25- 30% of Harris County (where Houston is located).

“One thing that Harvey helped teach me is don’t overreact or move too quickly,” he recalls.

Although Muñoz is discussing his approach to emergency planning and damage control, it could also describe his collaborative management style. “Inclusive,” “progressive” and “forward thinking” top the list of words which Professor Patrick C. Hughes Vice Provost at Texas Tech University where Muñoz served in various leadership roles for thirteen years, would use to describe him. Hughes first met Muñoz at the preschool both of their children attended. “He showed an interest in the lives of families there,” he recalls. “I learned later that this is the kind of colleague he would be, too.”

But it was more than just crisis management that made Muñoz’s first day and months on the job familiar. The newest of the UCs, Merced has a unique profile. Its student body is roughly 75% first generation college students, the majority are designated as federally in need with over 60% are eligible for Pell Grants (which are awarded on the basis of exceptional financial need). Merced has the highest percentage of first-gen and low-income students in the UC system. 55% of undergraduate students are Hispanic (vs. roughly 25% system-wide).

“You have an overwhelmingly diverse campus of students that are first in their family, that come from very modest circumstances,” says Muñoz, “so they face some adversity in terms of their access to information, their familiarity with the landscape, the milieu of higher ed. They may be apprehensive to ask certain questions, they may be reluctant to seek out help on occasion, so what we have to do is ensure this campus is populated by people who come from similar backgrounds.”

A CALIFORNIA NATIVE
Muñoz's parents immigrated from Mexico and his father worked in the fields of the San Joaquin Valley. Dr. Juan Sánchez Muñoz has deep roots in the UC System and the Central Valley region.

If Juan Sánchez Muñoz had been asked during high school what he aspired to do vocationally, he “would have probably said any job that allowed me to get rid of my bus pass.” His father, Javier Ramírez
Muñoz, was a farm worker who migrated from Mexico to work in California’s Central Valley before finding a factory job in Los Angeles. He met his future wife, Guadalupe Maria Sánchez, at the church they both attended and raised a family but Juan’s mother found work only sporadically, his father broke his back, and for a time, the family was on public assistance.

“Growing up in our neighborhood, almost all of us children of immigrants in an extremely poor community, I don’t think anyone could have predicted Juan would someday be the chancellor of a university,” says Todd Eldredge, a classmate at Bishop Mora Salesian High School in Boyle Heights, a predominantly Hispanic East Los Angeles neighborhood. But Eldredge, who was a fellow officer with Muñoz in their high school’s Letterman Society, an athletic club, recalled how “Juan pushed us to do the right thing even though it wasn’t the easy or popular thing to do.”

During high school, David Beaulieu BA ‘77, an English teacher who had graduated from UCSB, encouraged Muñoz to apply. “He talked about it as being a very lively, dynamic place,” Muñoz recalls. “He
talked about explosive ideas and political debates and that seemed attractive to someone who grew up in my little neighborhood in East Los Angeles. He made it sound bigger.”

Muñoz had never been away from home and says in a lot of ways, he was “very naïve.” His parents were supportive of the idea of college but never having attended themselves and speaking a different language, it was a somewhat abstract concept to them. His decision to pursue higher education was based on the incentive that motivates many first-generation students: the prospect of advancement.

“When you grow up in a certain degree of material inadequacy, you generally want to escape that condition,”

he says flatly. “So, I saw an education beyond high school as a method of doing that."

When he arrived at UCSB, Muñoz did not find near the level of diversity on campus there is today, when 29% of undergraduates identify as “Chicano/Latino” and 65% as non-white. Back then, he says, “I don’t believe combined minorities in 1985 were even 7%.” Yet Muñoz managed to find students whose backgrounds were similar to his own.

Born in Mexico, Salud Carbajal BA ’90 was the first in his family to attend a four year-college. His family lived in public housing in Oxnard and, like Muñoz, his father was a migrant farmworker. “My neighbors were not engineers, professors, administrators, doctors [or] lawyers," he said, "so I didn’t have those readily avail- able to me as role models, not to mention very few people that look like me.” Carbajal met Muñoz through a classmate who attended the same high school as Muñoz
and wound up as his teaching assistant for a Chicano art course.

In retrospect, he is not surprised that Muñoz became a university chancellor. “When I reflect back and think of his traits and his character,” he says, “I knew he was going to do something great in his life.” Muñoz might have said the same thing about his former T.A.. On January 3, 2017, the former member of the Santa Barbara County Board of Supervisors became U.S. Representative for California’s 24th District which includes Santa Barbara, San Luis Obispo and part of Ventura County.

How does a member of an immigrant family in which neither parent attended college, where their native language is not English and where income is a barrier, be- come a congressman or a university chancellor? Where do they even get the idea of such a career path if not at home?

“Not to correct you but just to clarify my father and mother were my most important role models,”

the Congressman gently explains. “I think they gave us the foundation to strive. Now, along the way, we met extraordinary teachers, counselors and mentors.”

Joseph Acaba BS ’90 echoes the sentiment. Like Muñoz and Carbajal, his Hispanic American parents did not attend college but he says “my most influential role models came from within my family. My grandfather had an eighth-grade education, but was always fascinated by the sciences. I remember watching films of the Apollo missions with him when I was a young boy.” Influential indeed. Acaba
would go on to spend 306 days in space on three NASA missions.

But before they became an astronaut, a congressman and a chancellor, Muñoz, Carbajal and Acaba met in the University’s Summer Transitional Enrichment Program (STEP) prior to their freshmen year, lived in the same residence hall and shared a friendship that endures to this day. While all three benefited from a strong family foundation, they also attribute their success to the support they received as students.

Carbajal credits the University’s Educational Opportunity Program as “being invaluable for me and the first-generation students attending a four-year university.” It was Geology Professor Art Sylvester (now Professor Emeritus) who encouraged Acaba to pursue a master’s degree through a minority scholarship program at the University of Arizona. The inspiration for Muñoz included faculty like Don Luis Leal, the legendary Chicano Studies professor who passed away in 2010 at 102.

For all the reinforcement they received, Muñoz and his classmates initially experienced a certain culture shock, particularly at a time when the campus was far less diverse. So, what gave them a sense of confidence that they could fit in? “The one thing I think we shared was we all had good interpersonal social skills,” says Carbajal. “We could talk, interface with anyone, all races, all genders and I think we got comfortable...the result gave us the latitude and the drive to take big steps and try big things.”

Muñoz served in the U.S. Marine Corps and taught high school and college before taking on leadership roles at Texas Tech and University of House-Downtown. When he accepted his current role as chancellor,
Muñoz had been eyeing UC Merced for some time. “I had been tracking the development of the campus since its initial cohort in 2005,” he says. “I felt I could identify with the faculty here and the students and culturally as well.”

And yet, asked if he sees himself in the students he has met so far, Muñoz replies, “I’d like to see some of them in me. I see more potential, I see greater ambition, I see a much more compelling drive in these young people.”

Hearing his plans for UC Merced, it’s difficult not to see the resemblance.

“I have not enjoyed the traditional sort of introduction to the campus that would normally be the case,” Chancellor Muñoz reflects. If he seems to be understating the pressures placed on him, perhaps it’s because he knows the drill. “There’s no doubt in my mind that having gone through Harvey that there were valuable lessons I hope I’m applying effectively now.”

Muñoz is tasked with considering testing, quarantine and isolation capacity, collaboration with government agencies on a coordinated response, preparing faculty to pivot according to fast-changing dynamics, and a myriad of other tasks that are not typically a part of the job description.

Yet he is also thinking post-pandemic.

“My intention,” he says, “is not just to recover and survive this crisis but to thrive.”

He wants to nearly double the number of students by 2030, grow the number of graduate students (currently just 8% of the 9,000-student population), and launch a school of management. Perhaps his greatest ambition is to become “an example of an institution that disrupts people’s sense
that there’s some conflict between access inclusion and excellence—that those needn’t be mutually exclusive.”

The new chancellor sounds like he is planning to stick around for a while.

“It’s still a very young campus,” he notes. “It’s still beginning to shape its identity which allows one to contribute to the formation of the identity.”