How UCSB Became the Center of the Quantum Universe

I was a sociology major who crashed and burned in Organic Chemistry.

I went on to a career in journalism where I covered economics, law, politics, love and death. So when I saw that UC Santa Barbara was in the national news for its research into quantum physics, I felt quite confident that this was a story that was going to be challenging and exciting. For starters I read the Cal Tech alumni magazine story on their quantum research. It was over my head—an alumni magazine story. So I moved to the New York Times piece on quantum where I quickly noticed they skipped over quite a bit of physics. Finally, I picked up the Los Angeles Times. They had it right. They just did a Question and Answer and focused on the personality of quantum physicists.

But this ignores a critical fact. Over the last year UCSB has become a hotbed of quantum research and its labs made a breakthrough that caused worldwide excitement in the nerdy world of theoretical physics. A mathematical problem that would have taken the world’s fastest supercomputer 10,000 years to solve took only minutes.

The Vocabulary of Q

Superposition: The positioning of Qubits to replace the 1 or 0 and combine them into one function. The positioning leads to major shortcuts in solving mathematical calculations.

Quantum Entanglements: The “spooky” side of quantum computing according to Einstein. When two qubits in a superposition are entangled they can be manipulated simultaneously and thus become far more powerful than the manipulation of just one qubit.

Quantum Speedup: The ability of qubits, when arrayed in numbers, to speedup at a phenomenal rate regular computations.

Quantum Supremacy: When a quantum computer completes a calculation that was impossible to perform with traditional computers.

Quantum Coherence: When a stack of qubits maintains its stability long enough for actual research tasks to be accomplished.

The research was conducted in a laboratory that is jointly run by UCSB and Google and led by UCSB professor John Martinis.

Martinis came to UCSB in 2014 to work with Google on building a quantum computer. He told the New York Times, “We have built a new kind of computer based on some of the unusual capabilities of quantum mechanics. We are now at the stage of making use of that power.”

Shortly after that announcement, the Department of Energy announced that UCSB would receive a $25 million grant to house one of the nation’s first Quantum Foundries, an Institute where quantum computing experiments can be harnessed to produce real world products as well as train the next generation of quantum physicists.

[The funding initiated by Congress directed the President to implement a National Quantum Initiative which promises to spend $1.2 billion on quantum research. This followed press reports that China is spending $400 million on a national quantum lab.]

These products are so spectacular that there is now a worldwide rush to conquer quantum computing and quantum imaging. Perhaps the most compelling use for quantum computing is in encryption. The potential to encrypt information in such a way that it cannot be hacked has led scientists around the world on a chase for qubit supremacy.

Let me pause here because I’m hoping I still have a few nerds and science know-it-alls hanging in with me.

When I started to research the quantum story I turned to my son who does computer engineering work at USC. I asked him to explain quantum physics.

He pointed me in the direction of a famous physicist from the 1930s named Erwin Schrodinger, considered along with Albert Einstein as one of the progenitors of quantum physics. He proposed a thought experiment. “A cat is in that box and it is either dead or alive. It is not known which until you open the box.”

My son then explained, “Dad, that is probably all you need to know about quantum physics.”

Then I really started to get buried. (In explanation, Schrodinger was essentially saying that there are things you cannot know until you actually observe them and that is mostly what quantum physics is today. By the way, Schrodinger also said we would never be able to observed quantum physics. Today experimenters around the world are carefully studying the quantum phenomena.)

The building block of quantum physics is the qubit. Its counterpart in the world of classical computing is the bit, which contains the information which we place in it. Qubits are quite different from bits, have properties like the ability to exist In two places at once, and are highly, highly unstable often disintegrating within nanoseconds.

Added to the complexity, the qubits are entangled in a subatomic maze which can best be described by someone with a PhD in physics. You get the point. Much of what quantum physics will be used for is still unknown. First it has to be better understood. Then it has to be controlled. Then its uses will begin to emerge.

Enter UCSB associate professor Ania Jayrich, one of the rock starts of quantum computing at UCSB. Jayrich has mega-credentials. She double majored at Stanford in math and physics. Received her PhD at Harvard and did her post-doc work at Yale. She holds the Brucker Endowed Chair in science and engineering at UCSB and was named the co-director of UCSB’s new Quantum Foundry. Oh, and she plays tennis at a very high level which is how she first visited the UCSB campus and thought this would be a great place to work.

Jayrich is quick to point out that while quantum computing has received almost all the media attention, quantum physics actually has several areas of interest and research, including areas that are of interest to Jayrich. Quantum devices, not necessarily computers, have the potential and power to act as sensors for very small objects and as a vehicle for communication. It will be the job of UCSB’s Quantum Foundry to establish an infrastructure that will build platforms where all three endeavors can be pursued: computers, sensors and communicators. The story of UCSB’s selection as the only site for an initial Quantum Foundry is a testament to the status and achievements of the University.

Everybody [in academia} talks about collaboration and inter-disciplinary cultures, but we actually have it. 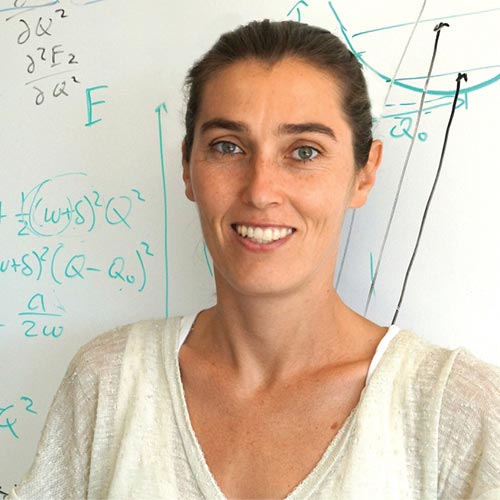 Some of the most prestigious physics departments in the country applied to the National Science Foundation for what was originally intended to be three or four Foundries. UCSB not only beat out these other institutions, but the NSF decided they would only fund one institution: UCSB.

Why? “UCSB has a special and good reason for getting the grant,” explained Jayrich. “Everybody [in academia} talks about collaboration and inter-disciplinary cultures, but we actually have it.” She recalled that when the NSF first put out the call for grant applications researchers across many disciplines at UCSB starting contacting each other, planning how to work together to get the grant. At other institutions, Jayrich recalled, she was told that key departments were not even communicating with each other.

It also did not hurt, Jayrich said, that UCSB has one of the largest undergrad physics departments in the country, has probably the top Materials Department in the country, and already houses the Kavli Institute of Theoretical Physics, considered the jewel of physics research in the U.S. The NSF wants the new Foundry to build strong ties to industry, to train undergrads and graduate students in quantum research, and to develop research that has the potential to be spun off into the economy.

“The main challenge,” Jayrich explained as she slipped into her physicist mode, “is pursuing quantum coherence.” This is one of the many holy grails of quantum computing. Because the qubits disappear quickly in the laboratory, physicists need to find ways to achieve “coherence” or the stable maintenance of qubits as they perform their tasks. To reach coherence the laboratories in the Foundry will have to be the most pristine, the cleanest in terms of outside particles, and superbly maintained. Google and Microsoft have already partnered in lab work at UCSB and have helped set the standard for quantum infrastructure. The Foundry will receive $7 million to advance the quality of the UCSB labs.

We have Albert Einstein to thank for all this. He explained the theory of quantum bits but never could actually see them. Jayrich 50 years later is seeing them. But she is quick to note, she does not know where quantum research will lead. The unknown world of physics has never been bigger. Even as quantum takes us into the nanoworld of the subatomic.

One last word to the reader: In the end, I found Wired Magazine’s Guide to Quantum Computing published in 2018 was the best explanation for a sociologist of a world that exists mostly in thoughts more than in our everyday world.