From Channel Islands to Your Local Dumpster….And Back

The shock for researchers came when the gull they were trying to catch regurgitated a corn dog. After all, the researchers from UC Santa Barbara were 12 miles off the coast of California on Anacapa Island. Yet it has become clear to one UCSB graduate student that a corndog on a remote island is not the only souvenirs gulls are bringing back from the mainland. Marine biologist Ana Sofia Guerra has found ketchup and dressing packets, chicken bones and tamale wrappers all tossed up by gulls coming back from the mainland. 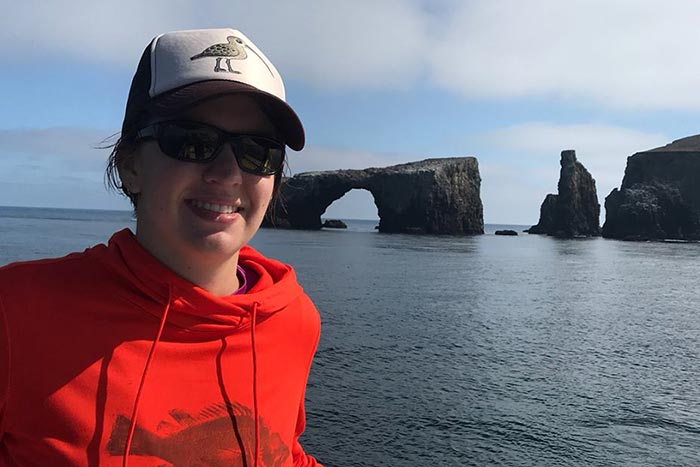 Though Pesky, Those Gulls Are Here To Stay

While the diet is of concern to wildlife biologists, Guerra is focusing on a unique question: Will gull guano which is the byproduct of human food diets, affect the environment of both Anacapa and Santa Barbara islands. These two islands, part of the Channel Islands off the Santa Barbara/Ventura coast are home to 99 percent of all seabirds in Southern California. In all, more than 15,000 western gulls live on the islands. And increasingly they are flying great distances to eat human food and then excrete it on the islands.

Guerra’s work came out of her studies under professor Hillary Young who for years has been placing GPS monitors on gulls to track their movements. The monitors are super light and tied to the gulls in a way that does not impede their flight or movements.

What the researchers have found so far is that gulls from Anacapa are travelling as far away as El Segundo and Torrance to eat garbage.

A gull’s normal diet is crabs, small fish and squid. “We know that gulls feed on trash,” Guerra explained. “You don’t need to be a scientist to know that.”

It is Young’s worry that by changing the diet of the birds, whose centuries long guano contributions have allowed the islands native habitats to flourish, the ecosystem of the islands could be contaminated. There is already some research that Arctic tundra habitats are being changed as a result of a change in the diets of local seabirds.

Guerra’s work is part of the McCauley Lab which is run by professor Doug McCauley and which has received major funding for ocean research from Mark and Lynne Benioff. Guerra grew up far from the ocean in Monterrey, Mexico and graduated from Stanford. She began much of her research on the Palmira Islands, a pristine South Pacific series of coral reefs that have become a baseline for UCSB researchers studying the impacts of human actions on the environment. It was her work with UCSB academics that convinced her that UCSB would be a creative venue to study for a PhD. Besides the gull guano research she is working on a study of coral reef ecology.

As for Guerra’s personal views of gulls, “I didn’t think much of gulls before I started.” But in studying the huge rookeries of the Channel Islands she realizes they are a “wild” species, not a tamed scavenger on the pier. “I like them,” she admits.

In the process of tagging the gulls with GPS units, she is quick to note the difference between the stay at home gulls and the coastal fast food eaters. When she picks up a bird that feeds on seafood it will “smell nice and look clean.” Then she will pick up a cousin who has flown for lunch to Torrance and tells them, “Ooo. You are grimy.”

Guerra’s work already has turned up on the front page of the Los Angeles Times. When asked how they got wind of a gull guano story she explained that McCauley has organized journalism panels at UCSB where grad students are given the opportunity to make a five minute pitch on their research.  A Times reporter heard Guerra’s pitch and wrote a lengthy piece on her work.

“We are more interested in how humans change animal behavior and what that does to our ecological system,” Guerra explained. While a gull eating a ketchup packet may not ratchet up global temperatures, it is just one more sign that human habits have far flung impacts on our environment.

Are We Missing the Boat on Fishing?

One of Ana Sofia Guerra’s many interesting research studies points out that fish left in the ocean may actually be more valuable than fish caught and sold for food.

With the tremendous rise in recreational diving there are indications that keeping fish in the ocean, particularly large and endangered fish, might produce more economic benefits than filleting them for the market.

In a recent research paper published with co-author UCSB professor Douglas McCauley it was estimated that the value of a netted giant sea bass averaged $12,600 per California fisherman, or less than 1 percent of the value of all other netted fish. Sea bass are behemoths that can grow to 500 pounds. They are endangered because overfishing in the 1970s devastated their species to the point they are now as rare as black rhinos. But they are still caught, by accident, and when they are, they are sold for food.

Using some unique assumptions Guerra finds that the value for recreational divers to be able to see giant sea bass in the wild far surpasses their value as food. The same goes for rare reef sharks in part of the Polynesias.

Recreational divers make 1.38 million dives off California and the industry is worth as much as $300 million. Guerra’s paper argues that we can balance ecotourism and commercial activities when it comes to sea creatures. We just have to learn how.