Getting Hooked at the Dinner Table

Four Alums are Bringing Fish Right Off the Boats 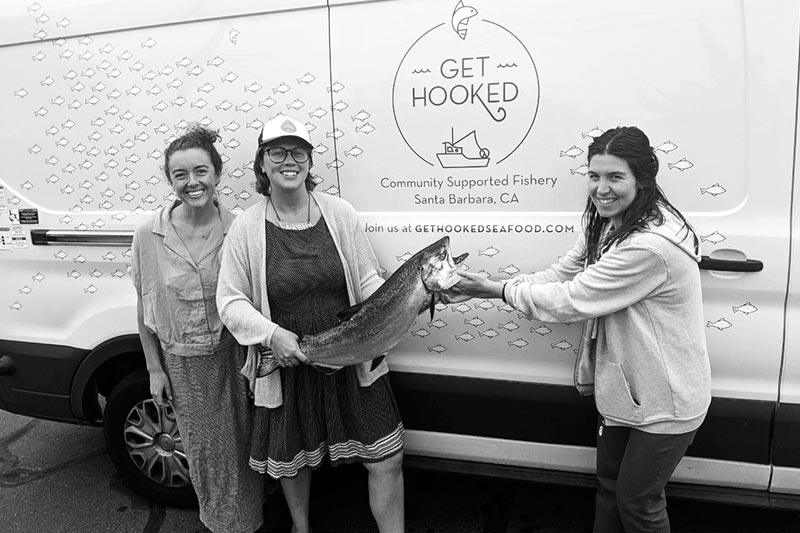 Just off the coast of UC Santa Barbara, you’ll find some of the most biologically diverse and rich sea life habitats in the world.

Yet in Santa Barbara, like most other coastal and inland communities in the U.S., seafood remains a less popular selection than other foods.

Four UCSB alumni women are going to change that, one filet at a time. 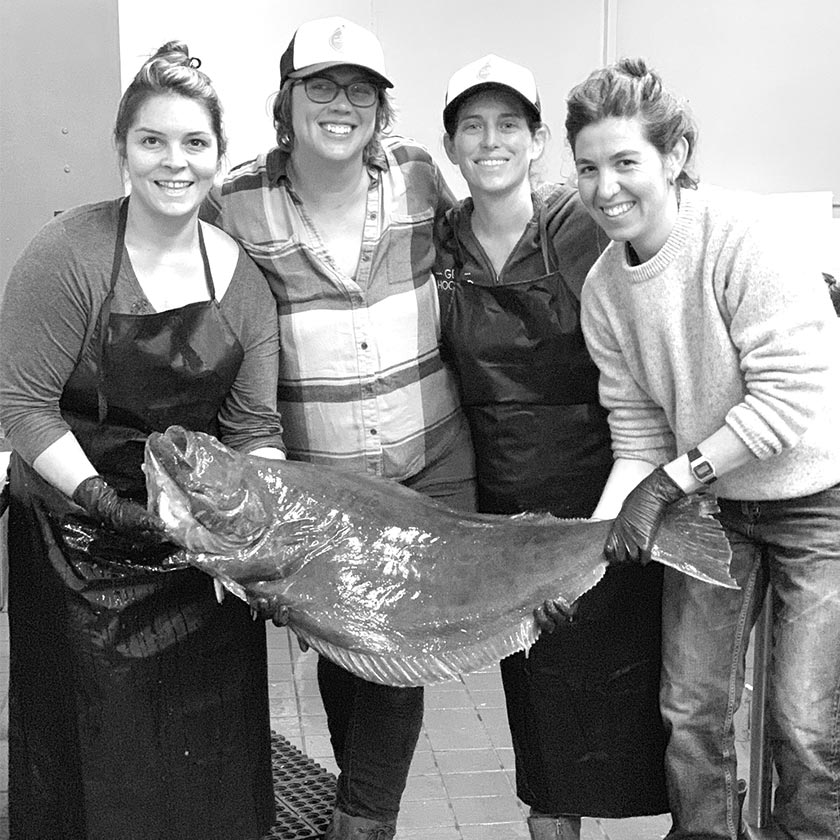 While the operation is not yet making a profit, it caught the attention of the U.S. Department of Agriculture which has given the partners a $500,000 grant to create a prototype that can be used throughout the country, if not the world, for the promotion of local foods for local consumers.

In the process of bringing weekly seafood catches to more than 350 customers, Get Hooked is also working to help save vast fisheries from both population wipeouts and even extinction.

The originator of the idea is Kim Selkoe, who received her PhD in marine biology and for more than a decade has worked as a researcher at UCSB’s National Center for Ecological Analysis and Synthesis (NCEAS) and the Hawaii Institute of Marine Biology.

It all started ten years ago when Kim was working on a project to save boatyard refurbishing property along the Santa Barbara waterfront. Throughout much of coastal California, pressure to gentrify and upscale oceanfront properties has been pushing the working fishing industry off the coast. That led Selkoe, as executive director of the Commercial Fishermen of Santa Barbara (CFSB), a 501c3 non-profit, to create a fish cooperative that would support local fishermen and women, while providing nutritious and healthy food to the local population.

Three of the four women, Selkoe, Voss and Vargas gathered in Selkoe’s downtown Santa Barbara backyard recently to discuss their project and very soon the phone was ringing.

It was a fisherman who turns out to be Voss’ uncle who had 100 pounds of fish caught the day before and wanted to know if they would buy it. The dilemma: by the time it is distributed, it may be “too old,” says Selkoe. “It would not be as fresh as we would like it,” adds Voss, who comes from a family of fisherfolk. In addition, it would have to be refrigerated for almost a week at some expense. So with much regret, the women turn down the offer.

It’s another day of managing fish, from boat to distribution at one of a number of locations around Santa Barbara in packages that range from 10 to 28 ounces. Customers can choose a weekly or biweekly pickup option with prices ranging from $15 to $42 per order. So far the range of seafood runs from salmon caught off Morro Bay to mussels grown off Hope Ranch. Rock Cod is by far the most frequent option but crab and shrimp are offered also.

Recently Get Hooked procured a shipment of tuna from a San Diego fisherman, but on their way to pick it up it was stolen off the San Diego pier.

Voss got involved as the second person helping to run Get Hooked because of her family involvement in fishing. Her uncle and brother are fishermen and her father received his PhD in marine biology from UCSB. He provides management consulting and has helped frame company policies on sustainability, as well as serving as the president of CFSB. Voss herself spent time in Alaska on a fishing boat and then started a similar fish cooperative in 2012 called Community Seafood. It didn’t survive but when Selkoe started Get Hooked, Voss got on board.

Vargas brings an even more diverse background. She has a masters degree from Bren School and her academic background is in studying fishing practices in her native Chile. “What interested me in this project is that it engages the whole community,” she explained.

"What interested me in this project is that it engages the whole community." -Camila Vargas MA '18

The project has received a grant from the U.S. Department of Agriculture which is interested in creating local food promotion programs across the U.S. “I don’t think we are going to make any money out of this,” Selkoe admitted. “This is more of a passion project.”

But Get Hooked’s next step is even more ambitious. They want to copy a CSF program in Monterey Bay called Bay2Tray which encourages local fish being served in local school lunch programs. In Monterey, Rock fish tacos are one of the most popular items on the school lunch menu. Who knows, maybe Urchin Joe’s will be next.

If the Get Hooked women have one major message it is “buy U.S. produced fish.” It helps the local economy, supports sustainable fish management and does not support near slavery in the labor that goes into foreign seafood. Most important, seafood can be consumed with far less of the energy and environmental inputs of beef, chicken or pork.

Not to mention, right off the boat tastes as good as it gets.

Our Channel is Thriving With Fish

Kim Selkoe explains that the local fish population in the Santa Barbara Channel, after 10 years of intense government management, is very healthy. Selkoe believes there is “no one answer” to the question of how to make our local sh ecology successful. Instead, the solution involves a combination of conservation, research and sustainable practices of the local fishing industry. The highlights:

• There are 180 local fishermen casting off from Santa Barbara. More than half are urchin divers.
• More than 27 different fish species constitute the top five fish landings at any given time, illustrating the diversity of the fish population.
• Sword fish, once thought to be headed for extinction as a result of over fishing, has made a dramatic comeback and now is being commercially fished.
• Large conservation areas have led to a boom in Rock sh. It is actually “underfished,” according to Selkoe.
• Mussels are now being commercially farmed off the Santa Barbara coast leading to a whole new supply of shell fish for consumers.
• The average price of fish off the boat has “soared,” according to Selkoe. Good for the local fish industry, not so good for consumers.
• The biggest challenge for the local fish industry, is a lack of space for support activities for dry docking boats and high housing costs that force the labor force to commute to the Harbor.