The spread of the coronavirus throughout the country led Chancellor Henry Yang to cancel all in person class meetings during the winter finals week and to suspend in-class meetings for the entire spring quarter. Classes will be offered but they will all be taken online. 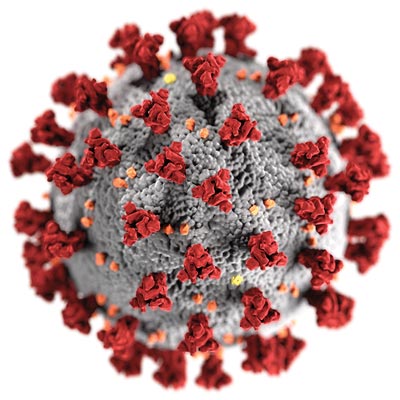 Yang made the moves even as five Isla Vista residents, all UCSB students, were put in quarantine after coming in contact with an infected person in San Diego. They later tested negative for the virus.

The campus has urged students not to return from the spring break holiday and to take their courses online from home. “The health, safety and well- being of our campus and local community is our top priority,” Yang wrote to the campus. “We are working closely with our county [health] officials and doing all we can to protect our campus family.”

Many staff members elected to work from home under guidelines issued by the campus human relations department. At the same time, for security reasons, many of the campus’ buildings were locked down to protect valuable lab equipment and office computers.

In a move that disappointed many UCSB senior athletes, the Big West conference cancelled not only its basketball championship but all intercollegiate sports for the spring quarter. In a message that brought sadness to many UC Santa Barbara seniors, the Chancellor announced March 26 that this year’s commencement would be postponed until later in the year.

Calling it a “difficult decision” Yang said the campus is committed to holding an in person ceremony “when it is safe to do so.” At the same time, the campus plans a “virtual ceremony” during the traditional commencement weekend, June 13-14.

“We know that this decision is a tremendous disappointment to our graduates who for years have devoted themselves to reaching this milestone,” Yang wrote.

Even as shortages of testing kits for the virus cropped up across the U.S., the UC system of medical schools dove in to address testing. The five UC medical centers are initiating their own in- house testing taking lead in the country among university medical institutions.

The tests can be turned around in 24 hours, a far shorter time frame than many testing procedures across the country. Yang has asked students not to return from spring break and instead take their courses from their family homes. The campus plans to refund students who move out of the dorms and then attempt to centralize those that remain. As Coastlines went to press it was unclear how many students were moving out of Isla Vista but issues were already arising about whether landlords would allow students to get our of their school year leases.

The Isla Vista Community Services District on March 24 declared a local health emergency and urged county and law enforcement to not allow large gatherings during the annual Deltopia event in early April. Concern has grown after the spread of the disease during the annual Mardi Gras in New Orleans and spring break on Florida beaches that the virus will spread easily among large groups of young people who then return to their home towns and pass on the virus.

On March 25 Santa Barbara County Supervisors Chair Gregg Hart ’90 asked faculty at UC Santa Barbara if they had chemical reagents that could be used in the testing protocol for Covid-19. As a result of the request, the campus donated a large amount of chemicals that were shipped to Ventura County where regional testing is occurring. The chemicals are in short supply throughout the nation.

The job action is not authorized by the union representing the graduate students, the United Auto Workers. They have a signed contract that forbids wildcat strikes.

Graduate students at UCSB are paid stipends and their tuition is waived. There is subsidized housing for at least the first year of graduate school. UCSB graduate students, who do the bulk of the teaching in small sections, want an $1,800 per month housing allowance.

Colgate Steps Down As Fundraising Leader 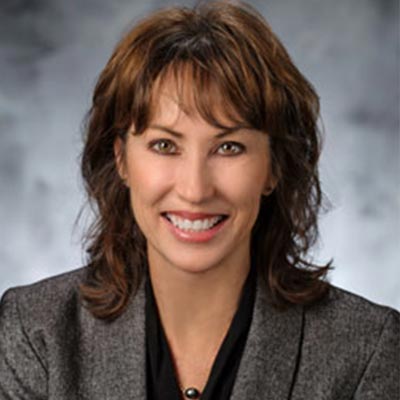 Beverly Colgate, the Associate Vice Chancellor for Development, has announced she is stepping down from her role leading the UC Santa Barbara fundraising efforts. Chancellor Henry Yang announced the decision at the UCSB Foundation Board of Trustees meeting in February.

Yang also announced that Colgate would take on a new responsibility of planning and leading the upcoming UCSB Campaign.

Colgate has spent three decades in Development work at UCSB and oversaw the dramatic expansion of the Development team and its efforts. Under her leadership UCSB launched a Give Day and increased the annual philanthropic support to more than $100 million per year. She oversaw the six largest fundraising years in campus history, according to Yang.

Taking Down Those Sweet Smelling Eucalyptus 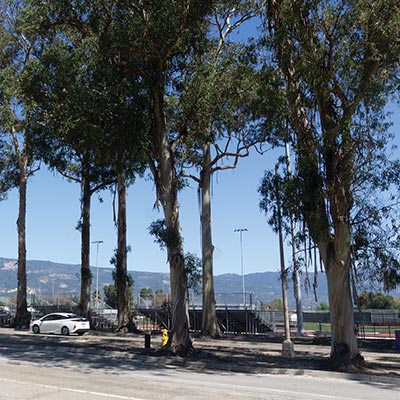 UC Santa Barbara arborists are working to remove a number of eucalyptus trees on campus that pose a safety and fire risk. Many of the trees are old and diseased and are prone to dropping huge limbs in wind storms.

While removing trees on campus has always faced popular resistance, the removal of the eucalyptus so far has been praised by students, faculty and staff. During a wind storm last year falling eucalyptus trees and limbs damaged UCSB housing offices and the Isla Vista Foot Patrol building.

The eucalyptus, which have given off a nostalgic scent for decades, will be replaced with East African yellowwoods, Mongolian oaks and ginkos. Some lemon gum eucalyptus, noted for their spindly appearance and ability to withstand wind, will also be planted. An inventory of wildlife in the trees will help
in planning the timing of the cutting and the replacement trees. 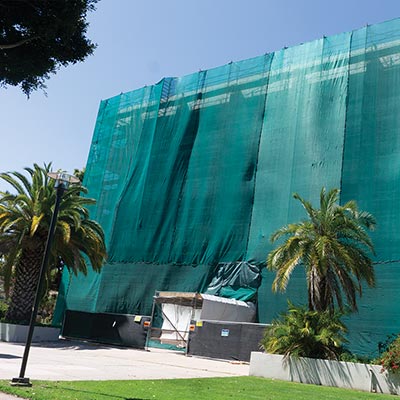 The UC Regents have adopted earthquake safety standards for UC buildings that are far tougher than California’s already high standards. The action could lead to huge costs for the system as it inventories its 6,000 building on 10 campuses and rates their ability to withstand earthquakes.

UC Santa Barbara is close to fault lines that have been active over the last 40 years. One of the largest retrofit projects in recent years was Davidson Library. Buildings are inspected and then given a 1-7 rating, with 1-4 as not needing
work and 5 indicating further study. Buildings rated 6 need immediate work and a 7 means the building should not be accessed. New buildings, like the Mosher Alumni House, will not be rated until sometime in the future. Many buildings on the UCSB campus have received a 5. Work was already planned to retrofit San Miguel and San Nicholas residence halls. All buildings have to be brought into compliance with the new standards by December 2030.

The University of California reported that its 2019-20 enrollment grew by 10 percent or more than 17,000 students compared to the previous year.

At UC Santa Barbara, overall enrollment grew to 26,309, an increase of approximately 400 students over the previous year, according to UC reports.

UCSB continues to be a campus of female majorities, with women making up 53% of the enrolled students. California residents make up 79 percent of the student body, a slight dip from the previous year. Forty percent of the UCSB students are first generation and 27 percent are from underrepresented minority groups.

According to UC reports, the UCSB campus has grown by more than 4,000 students over the past decade.

Across the entire UC system, the number of California residents attending one of
the 10 campuses rose by 2,614 students. Riverside, Irvine and San Diego had the largest enrollment growth, with Riverside adding more than 1600 students.

Under the leadership of newly elected UCSB Foundation Chair Betty Elings Wells the Foundation trustees have pledged to raise $4 million from their members in the next two years to support undergraduate and graduate student scholarships. Elings Wells kicked off the drive by personally donating $500,000 to provide aid for Promise Scholars. Promise Scholars is the program that provides four years of guaranteed financial aid to low-income, high achieving students. Of the more than 500 Promise Scholars currently in the program 87 percent are first generation college students and the average family income is just over $25,000. The campus is seeking to raise $25 million from private gifts over the next two years to fund additional scholarships.

California reported that its 2019-20 enrollment grew by 10 percent or more than 17,000 students compared to the previous year. At UC Santa Barbara, overall enrollment grew to 26,309, an increase of approximately 400 students over the previous year, according to UC reports. UCSB continues to be a campus of female majorities, with women making up 53% of the enrolled students. California residents make up 79 percent of the student body, a slight dip from the previous year. Forty percent of the UCSB students are first generation and 27 percent are from underrepresented minority groups.

According to UC reports, the UCSB campus has grown by more than 4,000 students over the past decade. Across the entire UC system, the number of California residents attending one of the 10 campuses rose by 2,614 students. Riverside, Irvine and San Diego had the largest enrollment growth, with Riverside adding more than 1600 students. 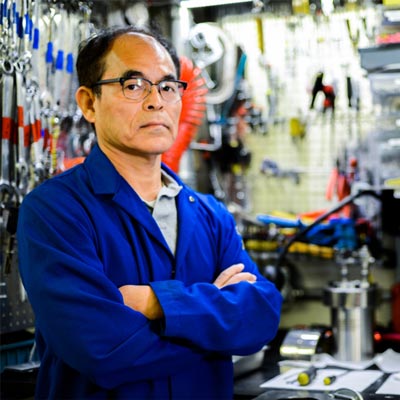 Much honored UC Santa Barbara Nobel Prize Winner Shuji Nakamura has been named the recipient of the 2020 Award for the Industrial Application of Science. The Award comes from the prestigious National Academy of Sciences. The Award is made, according to the NAS, for Nakamura’s “pioneering discoveries, synthesis and commercial development of Gallium nitride LEDs and their use in sustainable solid- state light sources, which are reducing global greenhouse gases while also reducing the costs to those adopting this technology.” Nakamura is considered the inventor of the white LED light which is found in
everything from outdoor and indoor lighting to car lights. Nakamura is a professor of materials and electrical and computer engineering. For his work he was awarded the Nobel Prize in physics in 2014.