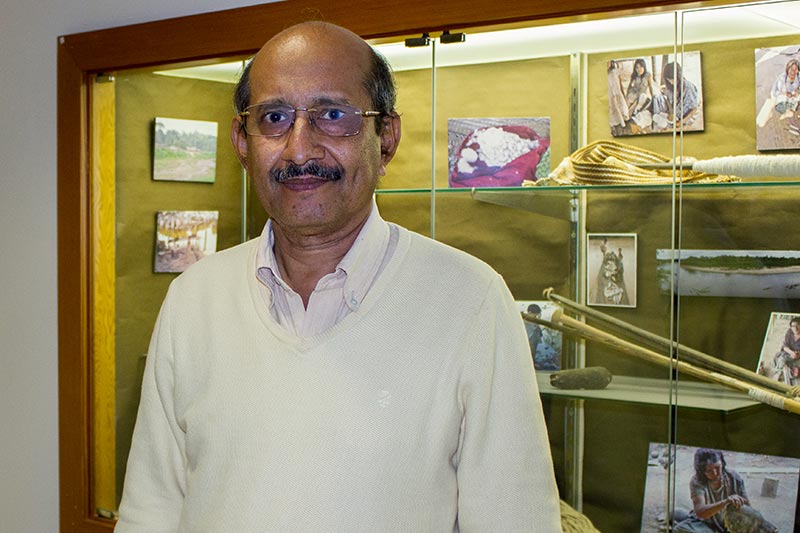 What do Manasendu (“Manny”) Kundu MA ’84, Ph.D. ‘94 and Al Gore have in common? The UCSB professor and the former US Vice President were both before their time in bringing to light an inconvenient truth about the impact of humans on the environment.

As an environmental anthropologist, Kundu focuses on what he describes as “the complex and dynamic interaction between human beings and their physical environment.” In other words, he examines questions with existential implications like “Are we heading toward an apocalyptic future due to environmental deterioration?” and “Is it possible to fight against consumerism in a capitalistic economy?” Kundu notes that the title of one of the two classes he teaches, an undergraduate course he developed for UCSB’s Environmental Studies Program in 1991 called “Human Behavior and Global Environment,” may be the first anywhere to blame human behavior for environmental destruction.

Kundu, who divides his time between his native India and Santa Barbara, where he has taught every summer since 1988, arrived at UCSB as a student in an unusual way. In 1980, he responded to an American professor’s lecture on ways to minimize corruption in India by writing to several professors in the U.S..

Can you recall the commentary which prompted you to reach out to American professors and why it struck such a powerful chord in you?

In 1980, an American professor went to India and gave a lecture discussing corruption in India and the ways to minimize the level of it. . As I didn’t agree with his proposal, I wrote a paper arguing that the existing social, economic and political systems benefit from the corruption. Consequently, there was no simple solution. In addition to this key issue, I included some distantly related topics in the same paper (being overzealous). After nearly forty years, I would say that some of my observations were right at that time and still are true today. The paper was sent to a few professors of two or three American universities. In the Department of Anthropology at UCSB, Prof. Mattison Mines and Prof. Donald Brown liked the paper which certainly displayed the courage of an Indian undergraduate student who was so self-confident that he didn’t dare to criticize the arguments of a renowned American professor. Probably the signs of courage and unconventional thinking laid [out] in the paper encouraged Prof. Mines to invite me to work with him as his graduate student.

You’ve said that “our own consumption is at the root of the environmental crisis” and that “Technology is only part of the solution. We need a behavioral solution as well.” Isn’t this view an example of something that most people resist acknowledging or even refute because it would require them to rethink their lifestyle?  Have you found an effective way to break down that barrier?

Usually the powerful and wealthy in the world do not like to acknowledge that we are heading toward a serious environmental crisis. They like to ignore the clear signs of global warming. Some of them think that if there is a problem, technology will take care of it.  Others believe that the problem is not imminent and there is no need to be panicked. Right now, cattle ranchers and loggers have created record number of fires in the Amazon to clear forest land for the sake of promoting their own business interest. Such an act of destroying the lungs of our planet is being supported by the Brazilian government. Some of the policies of the current US government [are] no different when it comes to [choosing] between the interests of business and the interests of environment. Most of the wealthy and powerful in the world will continue this behavior until disaster hits their own backyard. If they don’t change their attitude, humanity will have to pay a hefty price. It is an irony that Homo sapiens will become the victim of their own technological success. Probably teaching everyone in schools and colleges about the environmental impact of extravagant and unnecessary consumption would make progress toward promoting environmental stability. “However, the corporate lobbies would constantly uphold the idea that the more you consume, the better you are, the more successful you are.” In a situation like this, only a strong worldwide social movement can save the planet.

Do you find that your students and younger people in general are more willing to acknowledge the problem and accept responsibility or is the resistance universal?

In the large developing countries like China and India which are not really poor, youths dream to have an American standard of living. They know about the current environmental crisis, but are reluctant to make personal sacrifices. However, in the developed world, I see a change. Greta Thunberg, the teenage environmentalist from Sweden, has made a sensation in recent years. There are many other young people in different countries who are making a coalition. Personal sacrifice is at the base of their movement.

You mentioned than when you first arrived at UCSB, you weren’t aware of how human behavior was adversely affecting the environment. All these years later, you hear government leaders in the U.S. who deny global warming and other widely accepted findings of scientists. Do you see America as having taken steps backward environmentally while other countries, perhaps including India, have moved forward?

I have been shocked by some of the recent environment related policy changes by the current US government. The world’s most powerful, most wealthy nation with the largest number of renowned scientists is not only ignoring scientific facts, but also speeding up the destruction of the environment, as well as the future of the humanity. Consequently, the USA has lost the leadership role in the battle against global warming at a time when Greenland is losing its ice, Europe is frequently being threatened by heat waves, [and the] Amazonian rainforest is [on] fire.

It is true that India is trying to promote electric cars [and] solar power vigorously. However, at the same time, [the] government of India wants to achieve strong economic growth to make the country a “superpower.” Also, the large middle class of the nation want to own cars, air-conditioners and all other consumer goods. They want to have the lifestyle practiced in the developed countries.

On a personal note, you’ve said that when you are in India, you miss Santa Barbara and vice-versa. What is it you miss about each?

When I am in India, I miss the academic environment of UCSB. By academic environment, I mean the education system, the relative freedom of an instructor, the presence of great scholars in the departments, the resources in the library, extreme helpfulness of departmental staff and many others. Also, while in India, I miss the pleasant weather of Santa Barbara. When I am here in Santa Barbara, I miss my slow pace of life of Kolkata or Kharagpur, India. Often, I feel that six-week courses of the summer sessions are too hectic.

Editorial Note: Professor Mattison Mines joined the UCSB Department of Anthropology  in 1970, retired in 2005 and passed away in 2016.  Professor Emeritus Donald Brown joined the department in 1969.