Much of Isla Vista remains unchanged over the last four years. Parking is impossible to find. Loud parties are the constant background noise, drowning out the sound of the waves. The parks are brown after another summer of drought. Driving a car is still an invitation to carnage. Yet four years after a mass shooting tore the soul of the community, much has changed. Evidence is barely noticeable, but beneath the hustle and bustle of skateboards and bicycles change is in the air.

A newly formed Community Services District has convinced Isla Vista voters to levy a tax on their utilities that will generate almost $800,000 a year in community services and improvements. A few months earlier in 2018, the Isla Vista Recreation and Parks District convinced voters to renew a bond measure that will provide $230,000 a year for the next 10 years for park improvements and recreation programs. The Isla Vista Community Network has blossomed into a community forum with more than 20 organizations participating in regular meetings to discuss shared goals and upcoming events.

Nowhere is change more dramatic than the intersection of Pardall Road and Embarcadero del Norte. Chaos has been replaced by civility and civilization.

UC Santa Barbara has joined the effort with a pledge of $200,000 per year over the next seven years to augment the IVCSD budget. The pledge was made after UCSB residence halls were taken out of the CSD.

Nowhere is change more dramatic than the intersection of Pardall Road and Embarcadero del Norte. The uncontrolled intersection used to be a combination of the game of Chicken and Destruction Derby for bicycles, cars, pedestrians and skateboarders. The chokepoint for the entire community now has a traffic signal timed to give four minutes of passage for travelers in either direction. Chaos has been replaced by civility and civilization. The project was jointly funded by the county and UCSB and drew opponents who said it would not help. Instead the constant mayhem of the intersection has disappeared.

Potentially one of the most significant events occurred this summer when the boards of the Isla Vista Recreation and Parks District and the Community Services District held a joint meeting to discuss the future operation of the newly renovated Isla Vista Community Center. The IVCC is in the former St. Athanasius Evangelical Orthodox Church building. It was purchased with Isla Vista Redevelopment Agency funds but when the RDAs were abolished by the state legislature, the building reverted to the county of Santa Barbara. When reports circulated that the building might be sold to a developer, community activists rallied and convinced the county Board of Supervisors to retain the building and turn it into a community center, the only large meeting and events space in Isla Vista. Under the leadership of former Supervisor Doreen Farr and current Supervisor Joan Hartmann the county has obtained almost $800,000 in federal funds to completely renovate the 50-year-old building.

The IVCSD and IVPRD met in July to discuss options for its operation. With the assistance of Legacy Works, a community planning company, and funding from the Santa Barbara Foundation various strategies will be developed to operate the Center and to organize fundraising for its long term survival.

Nowhere is the new spirit of self-government more visible than in the Community Services District, which is overseen by directors (five elected from Isla Vista and one each appointed by the county and the University.) The board is led by community activist Ethan Bertrand, a current student at UCSB. The Vice-President, Natalie Jordan ‘18, graduated from UCSB this year, while the Secretary, Spencer Brandt is also a current UCSB student. The elected board is rounded out by longtime Isla Vista resident and Sheriff’s Department volunteer Chaplain Father John Hedges, and entrepreneur Jay Freeman. 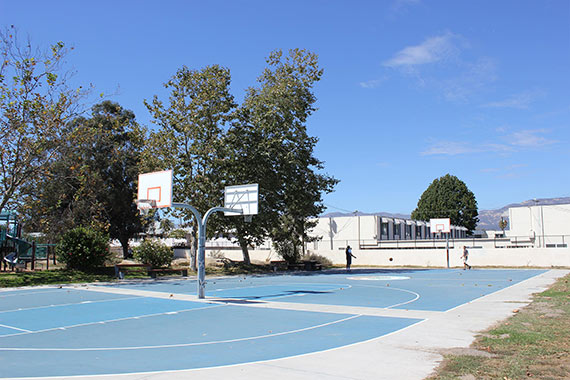 Formed through legislation sponsored by former State Assemblymember Das Williams ’05 MES, who grew up in Isla Vista, the CSD has specific powers to regulate parking, provide additional public safety resources, establish rental housing mediation services, institute a planning advisory group, and make capital improvements. The District formed in early 2017 but was not able to get its utility users tax passed until June 2018. Using UCSB funds, private foundation grants and a donation from county appointed Board Member Bob Geis, the District launched an ambitious agenda ranging from contracting for UCSB community service officers to provide public safety enhancements, to a vibrant use of its conference room for community and educational meetings.

The CSD meets in a conference room that used to be the home of the Isla Vista Neighborhood Clinic (which is now housed in an adjoining space). The meetings often begin with a good crowd but by the end of its long discussions and debates, the crowd has usually dwindled to a handful of reporters and activists.

In its first budget, passed in August, the Board set aside a quarter of its annual tax revenues for a reserve fund and $150,000 to contract with UCSB to provide a sexual assault investigator in Isla Vista. It also hired community activist and former UCSB Associated Students President Jonathan Abboud ‘14 as its interim general manager.

“The approval of the IVCSD’s budget marks a new day for Isla Vista,” Board President Bertrand stated. “This budget invests over $1.1M into community oriented public safety initiatives, community facilities and programs, community beautification, rental housing services, and much more  — all overseen by Isla Vista’s own municipal government.  The Isla Vista Community Services District is working hard to improve the quality of life for all residents of Isla Vista, as is demonstrated in the priorities of this budget. I look forward to our continued work with community members, businesses, non-profits, and other governmental agencies to serve this community that we all love.”

The longer term agenda for the CSD is to begin to alleviate the parking mess in Isla Vista and to address the issue of substandard and overcrowded IV apartments.

The IVPRD has decided to use its new funding for its parks, to bring recycled water and, in some of its most popular locations, add recreational equipment. It also has finished upgrades to the utilities infrastructure of People’s Park to allow more concerts and programs that require amplified sound and lights.

Pegeen Souter, ‘88, a longtime resident of Isla Vista and a board member of the IVPRD since 1994, says the mission of the District is to “help foster community in Isla Vista.” Many of the new tax revenues will go towards projects the community has long sought, including lighting for the Estero Park basketball courts and building a fenced dog area at Sueno Park. “These are just a few projects on our priority list,” Souter said. “We plan to make the most of the $230,000 we are receiving annually for the next 10 years.”

There are still a growing number of beer pong tables in IV front yards. Some areas of the community are eerily unlit. Out-of-towners continue to trash the area.

But the community now is building institutions and a small town culture that will continue to make Isla Vista the unique and unparalleled living experience it has been for many generations of UCSB students. Who knows, maybe someday it will be a model for lively but sustainable living.

George Thurlow ’73, is the UCSB Chancellor’s Special Assistant for Isla Vista and serves on the Isla Vista Community Services Board of Directors as the UCSB appointed representative.