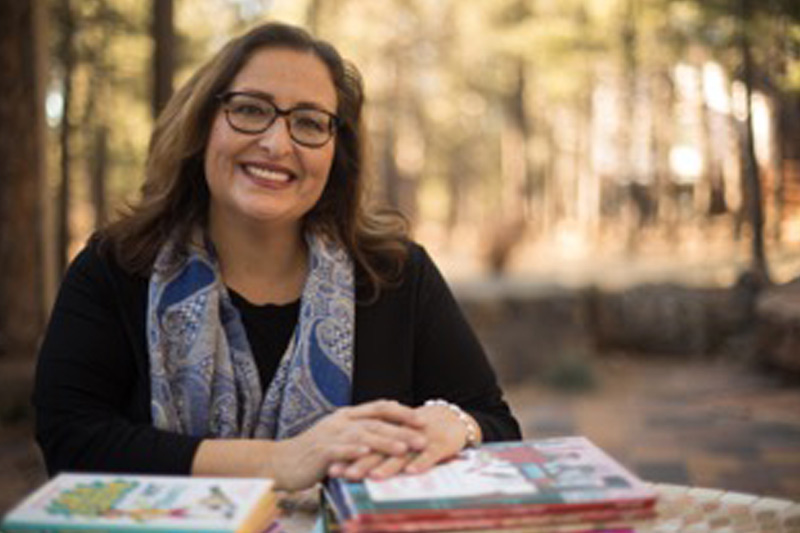 Latinx autor Monica Brown '91 brings a multicultural voice to her young readers. The author has written books for children about everyone from Gabriel Garcia Márquez, Caesar Chavez and Pablo Neruda to Pelé, Frida Kahlo and Tito Puente--though she is equally renowned for fictional characters like Lola Levine and Sarai.

Recollections from her own childhood and the experiences of her two daughters contribute to a strong girl empowerment theme, yet she says “I consider all children my core audience.”

Following UCSB, Brown received an M.A. in English from Boston College (1994) and a Ph.D. in English from Ohio State University (1998). Today, she teaches courses on Chicano, African American, and Multi-ethnic literature at Northern Arizona University.

What did you originally want to be when you were in elementary or high school--and who/what influenced that path?

I remember doing a report in 8th grade and stating that I wanted to be a lawyer for Amnesty International. I was already interested in the power of language and law and debate, and very much interested in human rights at a young age. By the time I was in high school, I was doing political theater and reading Joan Didion’s book-length essay, Salvador, which influenced me very much. As the daughter of a Peruvian immigrant, I felt very interested in, and politically engaged with, what was happening in Central America and beyond. My path became even clearer as books and reading became a central part of my well-being and intellectual development as a teenager, and I arrived at UCSB in 1987 a declared English major.

What is your own children’s relationships with your work? Did they grow up reading your books and did you get "material" and feedback from them? Or do you primarily rely on your "inner child" for authenticity?

You don’t need to have children to write for children, but you do need to understand how they talk and think. I was inspired to write in the first place because I didn’t see the books I wanted my young daughters to read on the shelves of libraries and bookstores. There wasn’t a single book about Gabriel Gárcia Márquez, my favorite author, so I wrote My Name Is Gabito: The Life of Gabriel García Márquez! There weren’t books about little girls like my own, so I wrote Marisol McDonald Doesn’t Match/no combina. I wrote the books I wanted my children, and other children, to read. I did share my work with my daughters and named characters after them and other nieces and nephews, so they found delight in that. As they grew, so did their critical feedback! In terms of “authenticity” I will say that I authentically respect the creativity, inquisitiveness, and dynamism of young minds and it is a true honor to write for them

Growing up, what were some of your favorite books? Were these also the books that inspired you as an adult when you started writing books for children?

I loved the lyricism of Dr. Seuss and the fantastical nature of stories featuring ghosts and witches. I had a picture book about the story of Esther, which I loved because she looked like me, with long dark hair! I find inspiration in many kinds of literature.

I assume you would like your books for children to both educate and entertain but which do you consider your primary "mission" as a writer?

Kids don’t particularly enjoy overly didactic books, just like they don’t particularly enjoy lecturing adults. I want my books to inspire, to bring joy, to entertain, and promote literacy, of course. I want to affirm their individuality and help them imagine their lives and full potential, no matter where they live or what their particular circumstances are. I also want children’s literature to reflect our diverse and complex world.

Similarly, I suspect you would like both primarily English and Spanish speaking children to read your books, but do you consider one to be your core audience?

The majority of my books are bilingual, or in English and Spanish editions. I’m bilingual and I love seeing Spanish and English, two beautiful languages side by side on the page. It allows for a multigenerational story time as well. For example, in some immigrant families, there might be a grandparent who speaks Spanish, parents that are bilingual, and children who only speak English. Bilingual books are also great tools for English language learners.

I consider all children my core audience, and I’m pleased to say that my books have been translated into almost a dozen languages, including Chinese, Japanese, French, Portuguese, Korean, Greek, German, and Croatian.

Can you share your UCSB story? How did the school land on your radar in the first place? What made you decide to choose it?

Growing up in California, I always knew I wanted to attend a big public university and I applied to four Cal State Schools and four UC Schools. UCSB was my absolute first choice. I fell in love with the campus—who wouldn’t, surrounded by water—and it felt like home. It still does! In fact, I was able to come “home” to UCSB as an adult when I received a Rockefeller Fellowship from The Center for Chicano Studies as an assistant professor. My family and I lived in graduate student housing a little over decade after I graduated from UCSB.

What was your experience there like? Were you very much focused on academics? Were you involved in social activism? Athletics? Other activities?

My experience at UC Santa Barbara was truly wonderful and helped shape the rest of my life. I had some truly fantastic professors, especially English professors Dr. Homer Swander and Dr. Carl Gutierrez-Jones, who encouraged me to attend graduate school, which I did. In addition to being a children’s author, I’m a Professor of English at Northern Arizona University where I teach Latinx and African American literature in Flagstaff, AZ.

At UCSB, I was involved in so many different things at different moments during my time there. I was always politically active, at times via CARN, the Central America Response Network, and L.I.V.E, Let Isla Vista Eat, but also in theater, and worked as tutor and as an R.A. during college. I loved my English classes and have been able to create a life of words—impactful ones. My first job was as a journalist in Guadalajara, Mexico, then I returned to graduate school for my M.A. and Ph.D. and wrote and published as a scholar before becoming a children’s author. I’ve taught for almost twenty-five years, inspired by my best teachers at UCSB.

What did you take away from your experience at UCSB that is applicable in your work today? It could be a specific class that (or professor who) resonated for you, an organization you were a part of, a group of fellow alumni you remain close with--basically anything?

I took several things away from my education and experiences at UCSB. One is that professors and teachers can have a profound impact on students—mine did and I’ve tried to pass on the confidence and self-belief I gained at UCSB to my own students at NAU. Secondly, I learned to support, respect, and advocate for affordable public education. It’s democratic, it’s essential, and it’s a gift to young people and to our future. It is my hope that my children’s books are a gift to young people, too.