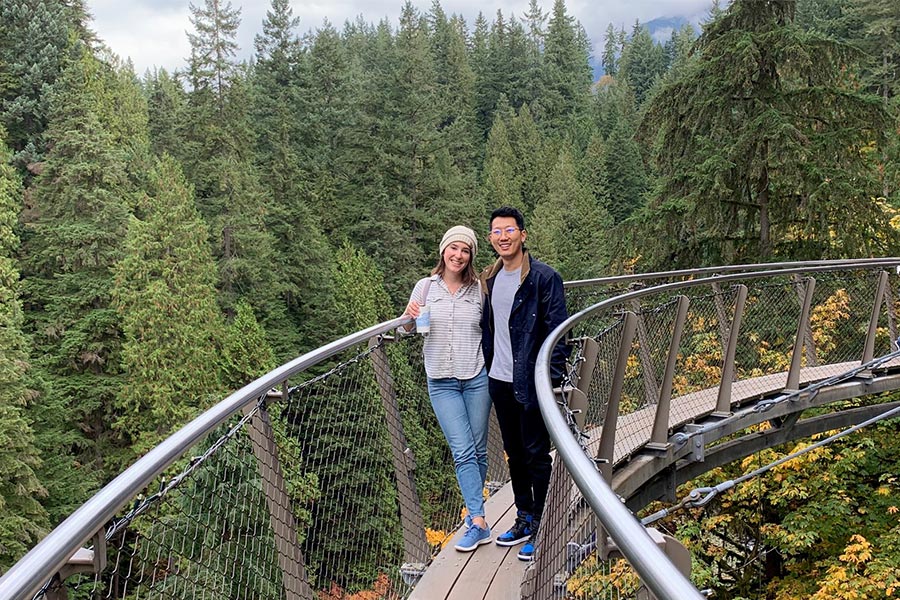 Taylor Heisley-Cook ‘19 and David Mun ‘19 met in the Eco-Entrepreneurship program at the Bren School of Environmental Science and Management.

Though they had different experiences leading them to this opportunity, they both had a passion for environmental science and sustainability. Growing up in Los Angeles, David saw firsthand how fashion influenced his community and how it became a necessity for sustainability to be ingrained into this culture. After undergrad, Taylor got to work with a marine plastics non-profit where she found a passion for saving the environment. The Hurd Co. started as a thesis project and is now a company aimed at eliminating waste in the creation of fabrics. Co-Founders Taylor and David believed in and created this company so we can all waste to wear.

We interviewed Taylor and David to learn more about the Hurd Co., the many challenges of sustainability, and what we should see from them in the future.

How did The Hurd Co. come to be?

Taylor: It was the middle of winter quarter and, at that point, David and I were on different projects. He had a really cool idea to make adjustable shoes that expand as a child grows. I was looking into tiny homes and how to encourage sustainable living.

One day, I was sitting in class and I had a thought that evolved into a question. What happens to plant material after the “useful” parts of the crop are harvested? Take hemp, for example. The plant is harvested for CBD, protein, and traditional hemp fiber. After all of that material is removed, about 70% of the plant is thrown away or burned. Was there a way to turn that material into fabric?

Emily Cotter, the director of the Eco-Entrepreneurship program, encouraged me to go for it and connected me with people who could answer my questions. I wanted to find out if this was an industry need and if it was scientifically feasible. From there, The Hurd Co. started to grow.

I decided to put this through as a thesis project three days before proposals were due. After it was accepted as a project, it was up to me to build a team. I always admired David’s work and passion for sustainability in the apparel industry, and knew we would be great teammates. I asked if the project was something he would want to join and it was. Our third amazing teammate Celine made us a trio!

David: We had this desire and common interest to innovate within the apparel industry because we knew there were a lot of issues. It’s a traditional and old industry that has been doing things the same way for a while. It was a timely opportunity too, since we saw how the apparel industry was hungry for new innovations. It wasn’t clear yet what innovations are able to reach a large enough scale to make a lasting impact.

What first sparked your interest and made you aware of this issue?

Taylor: I’ve been fascinated with fabrics for most of my life. My grandma taught me to sew when I was 6 and I became completely hooked, making my own clothes and going to sewing summer camps -- yes, they are a thing! I was always interested in sustainable materials, specifically. What made some materials “better” than others? While working at a marine plastics non-profit, I became more aware of the impact of our personal choices across various industries. The fiber fragment/microplastics problem in the marine environment is closely tied to the apparel industry. I began to realize that the only way to reduce our species’ impact on the planet was through empowerment. We need to empower people to make better choices by giving them better options. That’s sort of where I started from.

David: I was in the Boy Scouts of America growing up and achieved the rank of Eagle Scout, which is where my sustainability side comes from. I also coached basketball for a number of years. I saw the influence that sportswear brands and athletes had on the next generation. The kids looked up to Kobe or Kevin Durant and the messages of Nike with “Just do it.” I saw how powerful their influence was on these kids. I thought it would be cool to join a brand or start a company that would be able to influence the next generation and embed sustainability into the lifestyle for them growing up, as well as their families.

What are some of the main issues The Hurd Co. tackles?

Taylor: When we reach for our favorite t-shirt, we don’t always think about what it took to get that shirt into our closet or really even consider what it’s made from. The apparel industry relies on a lot of land and water every year to grow crops to make that fabric. When you take a step back and realize in the next 10 years we’re going to need twice as much fabric to keep up with demand, you realize it’s just not possible. We simply don’t have the land and the water to continue doing this. The biggest problem is how do we keep clothing people without decimating the planet?

That’s where David and I come in. We set out to find a better way to make fabric. Instead of using crops that are grown exclusively for textiles, we use plant material that’s left over after the harvest of various crops. We are primarily focused on hemp for now, but our process does work with lots of different types of ag waste.

There are three main kinds of fabric that are used for apparel: naturals like cotton, hemp, or linen; synthetics like polyester or nylon; and then there’s manmade cellulosics, known as rayon, viscose, lyocell. It’s actually the fastest growing part of the industry, and they’re made from trees! Obviously, there’s a huge reduction of impact when we use ag waste instead of trees. Beyond that, the process of actually pulping those trees can be pretty gross, for lack of a better word. If you compare our process to the most sustainable option for pulping trees, our pulping process uses half as much water, 350x less energy, and is a closed-loop process. It’s a true zero emission process. All of our byproducts are used by partner facilities to make biofuels and bioplastics which is another big reduction in impact.

Thrifting has become a trend amongst young people as a way to fight against fast fashion. How do you see The Hurd fitting in with this new movement?

Taylor: We’re both big fans of thrifting. If you can extend the life of a garment that’s the number one way you can reduce your impact. Fast fashion does seem to be slowing down a little bit. People are starting to become more educated on the impacts of fast fashion so that’s good news. Ultimately, the growing middle class is what is driving the increase in demand. Even if people are deciding to thrift their clothes and making conscious choices to buy more sustainable clothes, there are just more people buying clothes at a higher rate. The Hurd Co. is not conflicting at all with thrifting; we are huge supporters of thrifting. The greater awareness and increase in popularity of thrifting is a good sign. It means people are becoming aware of where their clothes come from and what happens to them when we’re done with them.

David: Thrifting and second hand shopping is huge and there are startups and companies addressing that demand. It’s going to be a combination because there will always be people who won’t buy second hand or will need new clothes every so often. We want to fill that need with a more sustainable solution.

What are your favorite memories from UCSB?

David: Taylor and I are both musical. I played violin and sang growing up and she’s a talented and trained singer. We were both in Brengrass and did covers of different songs. We performed throughout the year at places like Dargan’s and different venues across town. At the end of the year we had a huge barn party with our graduating class and we got a chance to perform there as well.

What would you like to see for the future of the Hurd?

David: We’re revolutionizing the pulping industry. It’s an old industry, there’s a lot of huge players that pump out a lot of pulp every year. If we can make a dent in that production and be able to provide a good number of brands with a sustainable cost competitive pulp that goes into the apparel supply chain, consumers can buy clothing that is inherently more sustainable. They are making a choice but they don’t have to pay a super high premium. For example, if all of H&Ms viscose and mmc clothing were made from our pulp, that would make a huge impact.

Taylor: Accessibility is a priority for us. It comes back to empowerment; we want people to be able to make better choices and have better options that are accessible that they can afford. It was definitely a priority to make a product we could sell for the same price as tree-based unsustainable clothing.

You can learn more about The Hurd Co. and keep up with their journey on Facebook, Instagram, and LinkedIn @thehurdco