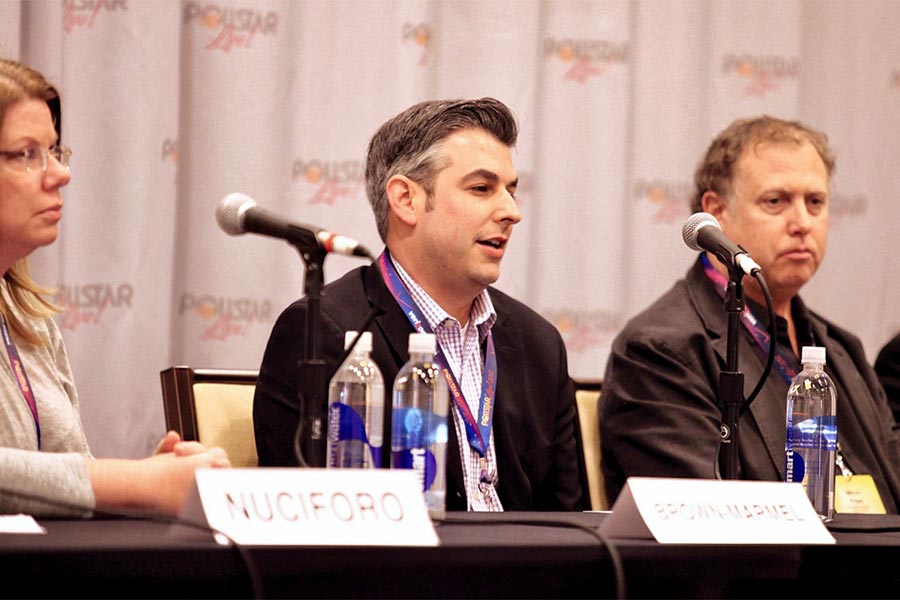 Ben Feigin ‘97 wins big as The Executive Producer behind Schitt’s Creek, making history with a clean sweep at the Emmys and beyond.

Ben Feigin studied Business Economics with an emphasis in Accounting. These days, Feigin may be best known as the Executive Producer behind the Award-Winning Series, Schitt’s Creek, which just made history with it’s clean sweep of the 2020 Emmys and garnering Ben an Emmy award-win for "Outstanding Comedy Series.” He was nominated in 2019 as well. Amongst other awards & accolades, Ben received a 2020 Nomination for the prestigious Producers Guild Award for “Outstanding Producer of Episodic Television, Comedy.” He is also the Founder & CEO of Equation Unlimited, LLC; engaged as a longtime representative for the past two decades.

Ben talks us through his journey in the business, with an inspiring tip-of-the-cap to UC Santa Barbara along the way.

How did UC Santa Barbara leave its mark on you?

There is one specific moment I remember. It was my final economics class and I studied, reached out to the TA for help, and stayed up all night. I worked closely with my TA at the time, as that class was so important to me, but it did cause a lot of stress. During the test, I walked out. To my surprise, my TA followed me, talked me through it, and changed my life. Who knows if I would have graduated if it wasn't for that one encounter? It is insane how there are just a few people that can impact you in the largest ways. And how I wish I could tell her thank you as that story almost brings me to tears.

A prevalent impact UCSB makes on others is recognizing our potential. I was in the most advanced accounting class where I realized that others around me were always working at the top and studying with students like this helped me strive for excellence. The higher I got in the food chain of my career, the more my emphasis shifted to becoming more and more cerebral. Failure is expected and feared, yet accepted. It is extremely hard to do, but UCSB helped me and many others remember what we offer the world.

How did you transition from Economics to your career in Entertainment?

My skills learned through the economics department are the skills I use the most. A class held by the late Paul Lazarus, original head of marketing under the Warner Bros., brought in prominent figures from the film industry every week. One day it would be a studio head, then the next an agent or a director. It gave me a taste of what the industry would be like for me.

I also read the book “The Agency: William Morris and the Hidden History of Show Business,” and this was the end all be all.

After graduating from UCSB, what type of work did you participate in that led you to where you are now?

At the start of my career, I honestly thought I would have to attend law school. However, I was able to connect the dots and get in contact with the technical advisor of the television show “ER.” He introduced me to the production coordinator for an internship. This internship was a commute from Isla Vista to Los Angeles as I was still attending UCSB.

Afterward, I got a job working for the head of the production at Warner Bros. Television overseeing eight of the top shows including “Friends” and “ER.” From there, the William Morris Agency was where everyone wanted to be. The UCSB connections matter here as George Clooney’s assistant was a fellow Gaucho. She was the one to highlight my resume to Clooney who then handed it over to William Morris. Subsequently, I started to meet the accounting firms and saw it wasn’t right for me. But the material I learned from UCSB, along with my knowledge in business allowed me to get into other areas. A lot of people are impressed when you have the UCSB work ethic.

This early work led me to many pathways that influenced my creation of Equation Unlimited, LLC. With this company, I can focus on the fresh outlooks that stem outside of the status quo. I was never driven by the latest trends or paid attention to the industry’s status. Along with the film production, some of these facilitations include creative commissions for President Barack Obama, an on-display exhibit for The Grammy Museum, and numerous children's books and audiobooks now utilized by public-school systems.

As the Executive Producer of the Emmy Award-Winning show, Schitt’s Creek, what were some of the things you contributed to making the show happen, and succeed in such a big way?

I have been a representative for 20+ years focusing on the entirety of a client’s career to manage and achieve their goals. I have been the long-time representative of Eugene Levy, and he asked me to manage his son, Daniel Levy, and his daughter, Sarah Levy. I have always loved Eugene’s films, “Waiting for Guffman”, and “For Your Consideration”. For several years, I would create a television vehicle for Eugene. I collaborated with Paul Feig, actor and filmmaker of “Freaks and Geeks” and “Bridesmaids.”

Daniel always had a skill for screenwriting as he did some work with MTV, and his dad, Eugene, has always been an executionist. I did something never done before and asked Daniel to write the script as I doubled down on financing to compose the 15-minute pilot to display for networks or exhibitors. The deals I made with networks and enterprises were predicated on the pilot, which was never seen before.

The journey was made through a non-traditional fashion, ultimately making a deal first with CBC Canada, Apple Canada, and Netflix Canada. We then circled back to American and global deals when Netflix decided to take the show on in 2017. Going about the production through many network negotiations created a big emergence of viewers everywhere. When Season 6 dropped on Netflix, Schitt’s Creek became the #1 most streamed show for weeks in a row.

I’m known as the champion of underdogs of the show. After all the defying odds, I, as the little engine that could, arrived at the Emmys. I was texting the head of Netflix and the CEO of Worldwide Production during the broadcast and they were pulling for us. And as soon as the categories started to get listed, we swept every category, again, never been done!

I see the roles in the industry as an equation. There are certain responsibilities people take on that are necessary for a production to be successful. We were able to figure out what we needed to create the highest sum for success.

What are some aspects of the business you find most rewarding?

When I was a kid, I would desire the joy of introducing a record I liked with everyone I saw. Or when Gumby performed by Eddie Murphy aired on “SNL”, I told everyone they had to see it. The best part of being self-made is thinking something is cool and allowing others to have the same excitement, wins, and gratification for watching it. It is wish-fulfillment. What drives me is making others happy whether it's the audience or clients.

I love helping others achieve their goals, but in seeing them as even greater than they see themselves, I deliver for them at a higher level. Never look down on anyone unless you are reaching down to help lift them. I love working with others who are young and dedicated to learning. When at the top or when all odds are against them, helping others to their goal is important.

The industry is a very competitive field and is known for its aggressiveness. At this point in your life, what is the most important advice you can give to someone who hopes to succeed in your career path?

My biggest piece of advice is to look for where you want to be. How do you get there? That goal is very important. Think of the endgame, and in the midst it will change and tweak, but working backward allows many doors to open.

What I learned at UCSB is the competitive nature all around campus demonstrates why focusing on yourself is what’s best. Competing against others paths can drive you nuts. Ultimately everyone is on a different path so creating your success is necessary. Be who you are all the time. Who cares about what anyone else thinks? If you believe in what you are doing, as Jay-Z says, “what do they know?”

Richard Branston also said, “why waste your time trying to be normal?” Do you. Be 100%. But fruition does matter as you can’t deposit “nice try” and “almost there" to your financial advisor!

Ben Feigin is a strong, yet humble mastermind in his profession and continues to create resources so people’s creativity can flourish and be available for the world. You can find more information on his success on his website.