Taking On the World’s Toughest Cancer 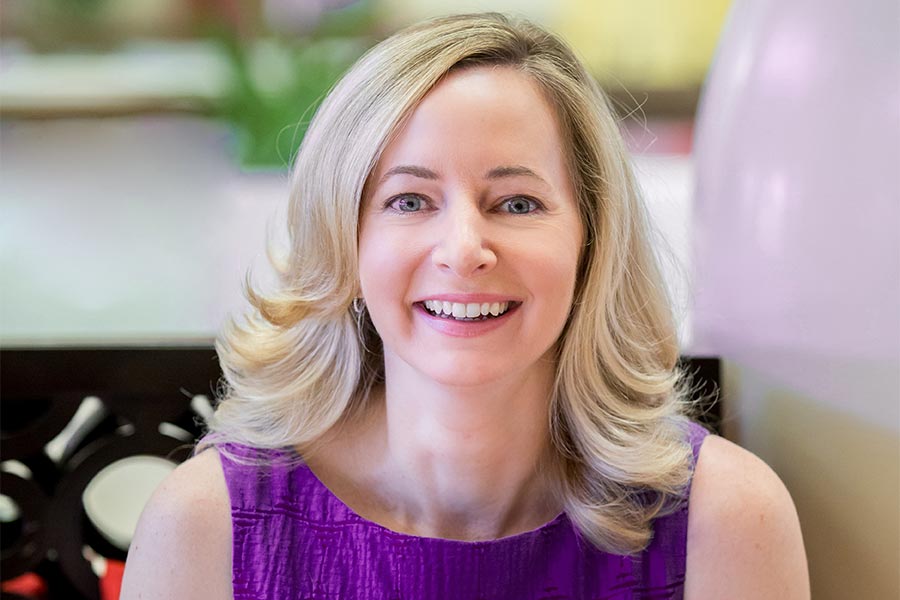 Julie Fleshman ‘97 has dedicated her life to global pancreatic cancer research. Cancer directly impacted Fleshman’s life but she uses her experience to provide hope to hundreds of thousands of people struggling with the same.

Julie Fleshman ‘97 is the President and CEO of Pancreatic Cancer Action Network, as well as the Chair of the World Pancreatic Cancer Coalition, a coalition of more than 80 pancreatic cancer organizations representing 32 countries. Fleshman turned a staff of one to one of one hundred fifty, creating a $40 million budget for research, treatment, and support. Julie has expanded her work with leading researchers and prestigious institutions to help study and fight pancreatic cancer. Julie has appeared as a guest on multiple platforms from “CBSN” to “ABC’s Good Morning America” sharing her story and advocating for others to help along the way. She recently led the organization’s launch of the ambitious Early Detection Initiative, a $25 million, large-scale research study that will look at new onset diabetes (NOD) and its correlation to pancreatic cancer with the goal of developing an early detection strategy for the disease.

We interviewed Fleshman to get an insider scoop on her story and why pancreatic cancer is a battle worth fighting.

What made you decide to become a Gaucho?

I am from Pleasanton, a city in Northern California so the beach was very attractive to me when deciding to go to UCSB. I think everyone agrees that the location is an exciting lure, but the fact that UCSB has an excellent liberal arts program was a huge factor. My degree can help me no matter what direction I would decide to go professionally. I graduated in 1997 in the Law and Society program and was awarded the Most Outstanding Senior in the program.

What organizations or clubs were you involved in during your time spent at UCSB?

My extracurriculars focused on policy and political science during my junior and senior years. I was the Law and Society Student Councilor for the major, meaning students would meet with me as their advisor to help them move forward in their college careers. I also planned and led a career fair for UCSB’s Law and Society students who were interested in a legal career.

I got the opportunity to study abroad my Junior year both across the country and on another continent. During Fall Quarter, I studied at Oxford University in England, and in the Spring Quarter, studied under the UCDC program with an internship working close to the United States Capital. These opportunities I remember very vividly as they were a once-in-a-lifetime opportunity while obtaining my degree.

I also remember when Walter Capps, a religious studies professor at UCSB, held an infamous class on the Vietnam War in crowded Campbell Hall; such an amazing learning experience. In 1996, Capps ran for Congress and I participated in his campaign canvassing neighborhoods and getting people to vote. Only 9 months after holding office, Capps had a heart attack and unfortunately passed away. It was a very traumatic experience as I worked so closely with him and his wife, who took his seat in the House of Representatives after his passing. But looking at the full circle, I now visit Capitol Hill to talk to officials on behalf of pancreatic cancer patients, and even met with his wife when she was in office, a connection I made through my UCSB experiences.

What inspired you to work closely with pancreatic cancer treatment and caregiving?

My father was diagnosed with pancreatic cancer in 1999, while I was working on my MBA at Santa Clara University. He died four months after his diagnosis. I was mad. I was upset. I was confused. I couldn’t understand why there was nothing I could do to save his life. I came across Pancreatic Cancer Action Network (PanCAN), founded around the same time by three people who also lost loved ones to pancreatic cancer. I learned about them when they didn’t have any staff so I reached out to volunteer for the organization.

My volunteer position shifted into their first hired position for the company, and I never looked back. Back then, I didn’t think I would run a non-profit organization, but it actually has allowed me to do all the things I prepared for in college. My entrepreneurial spirit loved the strategy and start-up of a new organization, the policy work, working with members of Congress, creating something from nothing, and doing good for patients and their families nationwide.

Your work utilizes science, public speaking, public policy, and more. How did UCSB help you in your diverse career and open mindset?

It all goes back to Law and Society being such a perfect major for me. There were emphases on many different courses from political science, geology, art history, the Vietnam War class. I was fortunate enough to take a diverse array of classes. UCSB also created a well-rounded view of the world by offering Black Studies, Gender Studies, and many socially relevant humanities courses needed to understand today’s climate. You need empathy for the different life encounters of different people, and UCSB provided that.

Although I was very studious, the social aspect of UCSB aided my understanding of the diversity of our country. I met some of my dearest girlfriends at UCSB who are still my close friends today. College friends mold and shape your perspective and life. You learn about one another and become so close and next thing you know, we are at each others’ weddings!

You were the first Executive Director of PanCAN in 2000 and appointed president and CEO in 2004. What drove you to this growth; especially in such a short time?

Pancreatic cancer is at the top of the list of the most difficult cancers to work with. With PanCAN, I had to approach it aggressively, take some risks, think outside of the box, all while handling it with no fear. With my schooling and how I was brought up I could say, “Alright, we can conquer the world.”

With my textbook Type A personality, I put a plan in place to expand PanCAN. The board saw those accomplishments plus how successful we were becoming in a short period of time. I was offered the role of President and CEO of PanCAN in 2004.

I still think about my dad every day, but 22 years ago, my father’s passing was so fresh and new that I had an immense motivation to honor his legacy through PanCAN.

You are frequently on Capitol Hill advocating for federal research dollars while also on national tv sharing your story. How did UCSB help build your momentum to seek more and benefit others while doing it?

I think, again, liberal arts allowed me to be the well-rounded person I am today. I enjoy presenting and talking to a crowd. Nonetheless, that wasn’t the case my whole life. UCSB helped me learn to love public speaking whether through presentations or group interaction.

In general, to fly to England for a quarter and live in a new environment, forces anyone to crawl out of their shell. Subsequently, traveling to Washington DC as an independent student allowed me to grow and not be fearful to think outside of my comfort zone. These four years are the time of your life to figure out who you will be.

I think everything I did with UCSB emphasized that we can make the world a better place. In this case, I am very focused on pancreatic cancer and how can I take my skill sets and apply them to drive this mission and my passion forward. UCSB was the perfect place to build my foundation.

The little things like trying to park your bike with the other thousands then forgetting where you parked after class. They make you pause and realize: don’t sweat the small stuff, instead seize the moment and follow your dreams!

Some words from Julie to Our Reader: If someone has a family member or someone you know that has been diagnosed with pancreatic cancer, we have an amazing patient services program that is available to anyone free of charge. If you would like to get involved, we have many volunteer opportunities—go to our website and join us at one our virtual PurpleStride events! Donations also help us fuel our mission and are greatly appreciated.