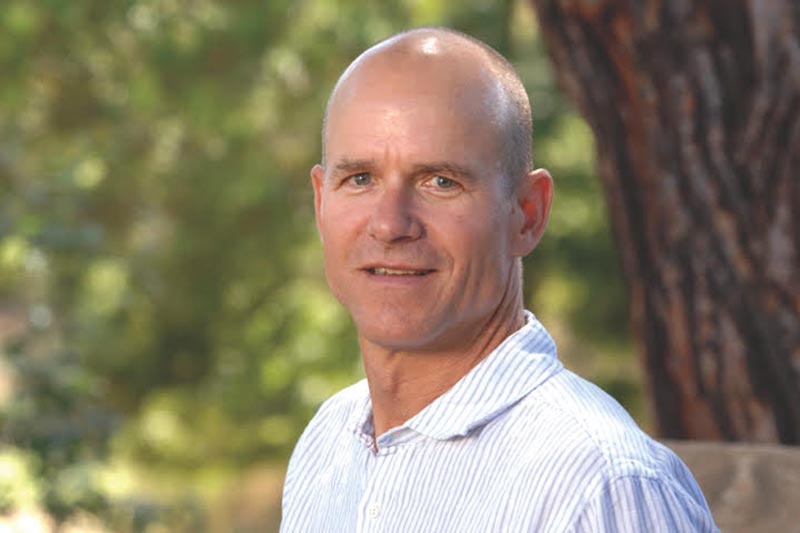 You don’t get to be a Professor of East Asian Languages and Civilizations at Harvard University by accident, but a noted authority on the area, James Robson, originally had another region in mind. “My initial interest at UCSB was not in Asia, but in Mesoamerica,” he explained. “However, I found myself drawn to checking out a Chinese language class and it changed my life for good. As my luck would have it, Chinese 1 was being taught by Professor Kenneth Pai (Pai Hsien-yung), a famous Taiwanese author, and he encouraged me to go to Taiwan if I was serious about learning Chinese. I took his advice and went off to Taiwan where I lived for about 5 years. While I was primarily interested in mastering Chinese, I saw the vibrancy of Chinese religious practice in action. Days were filled with visits to Buddhist and Daoist temples and attendance at loud and colorful exorcistic rituals. I knew from that point on that I wanted to study what I was seeing.”

Robson, who received his B.A. in religious studies from UCSB, returned for his MA. “At that time my professors impressed on me how important it was to learn Japanese if I wanted to proceed to a Ph.D. program and so I headed off to Kyoto. I envisioned it as a six month language immersion but ended up staying for 5 years. I think you can see a pattern. “I was not a fast language learner,” he quips. He received his Ph.D. in Buddhist Studies from Stanford University in 2002 after spending many years doing research in China, Taiwan, and Japan.

Today, he teaches East Asian religions including Daoism, Chinese Buddhism, and Zen, specializing in the history of medieval Chinese Buddhism and Daoism. His current research focuses on the history of Buddhist monasteries and mental hospitals in Japan. Robson taught at Williams College and the University of Michigan before joining Harvard in 2008.

On November 19, as Director of the Harvard Asia Center, Robson moderated a panel entitled: “REPERCUSSIONS: THE HONG KONG PROTESTS IN CONTEXT,” which was aimed at broadening the discussion about the ongoing protests in Hong Kong. Panelists considered the impact of the protests beyond Hong Kong (such as the upcoming elections in Taiwan, regional business interests, tourism, etc.), placing the current demonstrations in the context of previous protest movements in Hong Kong and other parts of Asia.

Here, Robson weighs in on some of the timeliest issues in the region:

What about the Hong Kong/China story do you think has been missing from the reporting?

Since the protests began in June of 2019, the media coverage has been pretty good thanks to the dedicated efforts of some excellent journalists who have tried to cover this complex issue from multiple perspectives. What is new or different about the present movement? In addition to monitoring the increasingly dire situation on many of Hong Kong’s university campuses, I am particularly interested in thinking about these protests in the context of other movements in Hong Kong, Korea, Taiwan, China, and Japan and how we might situate them in the context of larger trends on civic engagement and mass mobilization.

Can you see any positive resolution for protesters in Hong Kong or will this situation inevitably end in another Tiananmen Square? And what are the implications for Taiwan?

This is an exceedingly difficult question to answer. I am rather pessimistic about what the end game of all this might look like. The level of violence has escalated on both sides as positions have become more entrenched and there does not seem to be a clear path forward to a resolution.  I have already mentioned above the impact of the Hong Kong protests on the upcoming elections in Taiwan, which are already discernable.

China has this bifurcated system of more "freedom" economically and perhaps even less (if that's possible) "politically." Communism and religion rarely are compatible but what is the government's trajectory in terms of religion? On the one hand, they seem to have cracked down on Falun Gong, the Uighurs, etc. Does that indicate a continued hostility toward religion in general or just antipathy to selected minorities?

My perspective is that the issue of the relationship between religion and the Chinese state needs to be put in a historical context that begins not with the Communist government, but much earlier (in the 19th century). That being said, with the establishment of the People’s Republic in 1949 it looked as if the government was inaugurating a period of relative religious freedom since it guaranteed one’s right to religious belief. This “religious freedom” was, however, a tightly controlled semblance of freedom, since the type of religion that was considered acceptable had to be in accord with the confines of the state’s new category of religion and religious practices had to remain within the law and not threaten social order. I tend to think of religion in China as being like a metal spring. During the Cultural Revolution that spring was pressed down and tightly compressed. When the restrictions were lifted the spring did not remain compressed but sprang back with a tremendous force. It is the new government religious policies that were begun in this period that created the context for the growth in importance of religion for both the state and individuals in contemporary China. Like the earlier policies, the Chinese Constitution of 1982 guarantees the people’s right to believe in legitimate religion as well as the right to not believe. Much has hinged on the interpretation of what constitutes a “legitimate religion.” In general, the state has maintained prohibitions against religions that disrupt public order, impair health, obstruct education, or are dominated by foreign interests. During the 1980s, China began to again enjoy freedom of religion, but that freedom has also been hemmed in by constraints due to the Communist Party’s ongoing fears about the potential threat of religion to social order. The Communist Party has also gradually come to realize some of the economic and social benefits that the orthodox religions could offer the state. There is no question that the revival and growth of religion in China in the 20th and 21st centuries has been dramatic, but rather than think of it as a return of the old-time religion of the past, what we have witnessed over the past 30 or so years is the rise of something entirely new and embedded in new historical contexts that have provided a fertile field for the growth of religion. That being said, recent years have seen a palpable change as the topic of religion has become a sensitive issue again.

Falun Gong and the Uighurs are quite different cases. In each case, religion is part of the issue, but what seems equally significant are issues of social mobilization (in the case of Falun Gong) and ethnic tensions and political resistance (Uighurs).

Much has been made of Chinese President Xi's increasingly authoritarian rule. Can we assume that he will be "president for life" and that therefore, China will remain a communist dictatorship as long as he is in power?

In 2018, the National People’s Congress of China removed the two-term limit for the Chinese presidency. This constitutional change elevated Xi Jinping to a status on par with Mao Zedong. This consolidation of power means that Xi can indeed be “president for life” that rolls back changes that had been initiated by Deng Xiaoping to move away from authoritarian rule. While the move to consolidate power is part of the story, others have speculated that one motivating factor for this change is related to Xi's corruption investigations, arrests, and punishments of officials, oligarchs, and others, which has led to some allegedly wanting to seek revenge. If Xi were to step down from office, he would no longer have the types of protections he currently enjoys. So, yes, as long as Xi remains in power it seems the current political situation will remain, but it is also clear that the policies under Xi are in fact becoming more repressive over time as the rule of law has become even more attenuated.

What made you select UCSB and can you characterize your time there?

When I went to UCSB the only way it was possible for me to attend was due to the G.I Bill, which provided educational assistance for families of service members.

I was not a stellar high school student and probably did not have much of a chance of getting into any college, but I had played water polo pretty well and UCSB had an excellent team. I only played briefly and then academics slowly began to take over. I stay in touch with many friends from undergraduate days at UCSB. Some also went on to become academics and others are doing fascinating things, such as running a brewery or working for a local government. I have stayed in pretty close contact with a number of influential professors who changed my life (Allan Grapard, Bill Powell, and Ronald Egan). I also met another important person at that time, and we have now been married for 27 years.

Is there, for example, a particular professor, a certain class, or even some non-academic part of your experience that is applicable in your work (or more broadly, your life) today--something of a lasting takeaway?

This is a tough question. I have never experienced “real life.” What I can say is that the most impactful professors I had at UCSB prepared me for “academic life.” What I mean by this is not just the necessary academic skill set, but how to find a balance between one’s academic work and taking time to decompress and enjoy life. They all also emphasized the importance of spending time abroad both to study and master the necessary languages, but to also immerse oneself in those cultures. Following UCSB, I spent about 5 years in Taiwan, 5 years in Kyoto (Japan), a year in China, and numerous extended stays in India, Nepal, and Pakistan. It is hard to quantify just how important those experiences were, especially those that did not involve university research, but I know that they influence my work and life on a daily basis. I recall one of my professors once saying something to the effect “that anything seen was as good as anything read.” This is one of the reasons that during my time at Harvard I have been actively engaged with the Harvard Summer school program, where I serve as the Director of the Kyoto program, which brings students abroad for eight weeks every summer.

This interview was edited for clarity.