The Tax Man is a Gaucho

Michael Desmond ’90 confirmed by U.S. Senate as IRS Chief Counsel and Assistant General Counsel in the Department of the Treasury 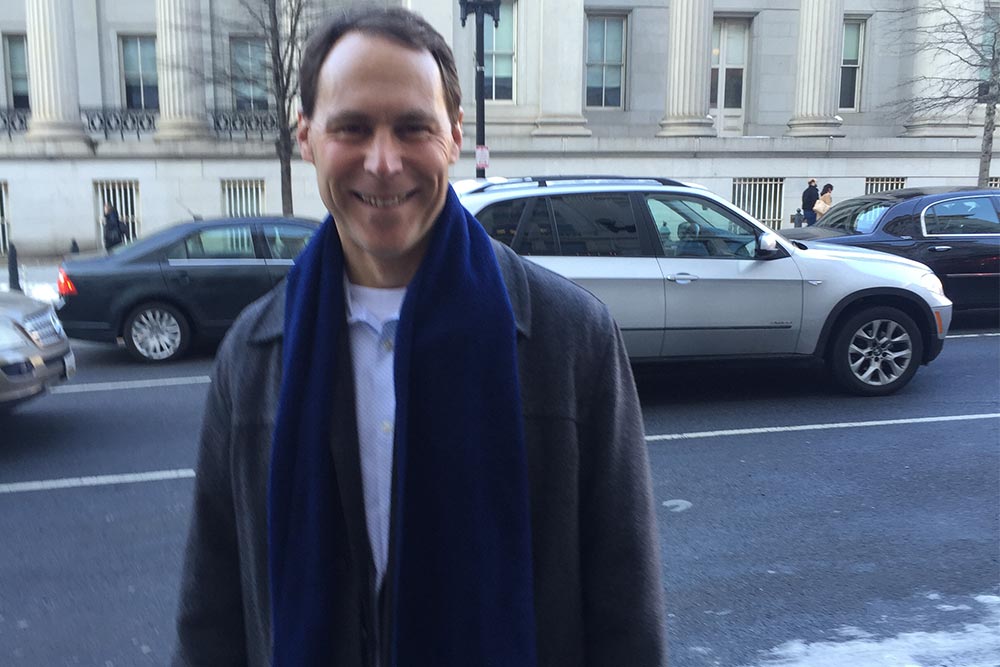 Michael Desmond outside Old Ebbit Grill in Washington DC, across from the U.S. Treasury building where he will be spending a lot of his time.

He greets by first name the former Assistant Secretary of the Treasury at the next table. He introduces the waiter, Fabian, as an old friend.

It has been 10 years since Desmond ordered breakfast in this Treasury Department hangout, but he slips into its routine like a pair of worn slippers.

In March 2018 President Trump nominated Desmond for the IRS and a position as Assistant General Counsel in the Treasury Department. But the nomination languished in the Senate, even after getting a vote of approval from the Senate Finance Committee. It died when the Senate term ended Dec. 31.

In February, when the Trump Administration re-nominated Desmond, his nomination sailed through the Finance Committee. Almost a year after being nominated Desmond was finally confirmed by the U.S. Senate on Feb. 27 on a 83-15 vote.

It has been quite a journey for the 1990 graduate of UC Santa Barbara. He describes himself as a “solid B student” who was not “as focused as I should have been.” Not until his last quarter, when he took 21 units and received straight As, did he feel like he was working to his potential. He recalls now that UCSB “gives lots of discipline even with all the distractions.”

It was really at UCDC, the UC system’s internship residency program in Washington, that Desmond discovered the excitement of the nation’s political system. He did an internship with Sen. Paul Simon (D-Ill) who had just finished a run for president. It is where he met his future wife, Kristin ’90.

He decided to attend Washington DC’s Catholic University Law School in the fall of 1991. There, he took an interest in tax law, learning that our tax codes are as much about setting government policy as collecting revenues.

“They show a Congressional bias towards certain socio political issues,” he explained over coffee at the Old Ebbit Grill.

His next step was a federal judicial clerkship in Los Angeles where he came under the mentorship of Judge Ronald S. W. Lew, who convinced him that Washington was where the action was, not Los Angeles. Judge Lew introduced him to a “wide range” of Washington insiders and in 1995 Desmond landed a job as a trial attorney for the Tax Division of the Department of Justice. He later was the tax legislative counsel in the Treasury Department, which is across the street from Old Ebbit Grill.

In 2005 he returned to the Treasury Department but came back to his old law firm in 2008. By 2012 he was ready to return to Santa Barbara to open his own tax law firm. (His wife Kristen opened a very popular catering and restaurant business in Santa Barbara called Flagstone Pantry. The restaurant donated food and services to many non-profits and hosted UCSB events.)

Desmond attributes his nomination by the Trump Administration to his many contacts in Washington, his work in the Treasury Department, and his high profile involvement in professional tax law associations.

In his role as General Counsel Desmond oversees 1500 attorneys and the interpretation of the tax law.

Desmond’s work on both sides of the tax issue has led him to conclude that the general public has a huge misunderstanding of what the IRS does. “The public perception of the IRS is as a debt collector. For most of its existence it has collected revenue to fund the government.”

What people sometimes fail to realize, according to Desmond, is that the IRS and the tax law it enforces cut across a huge swath of American life.

It is the IRS that enforces provisions of the Affordable Care Act, private profit sharing plans and public pension plans, corporate tax issues and provides deductions for mortgage payments, state and local taxes and health benefits.

Desmond explains that the tax code in the U.S. is used by Congress to promote various policies, from subsidizing home purchases, encouraging individuals to save for retirement through 401Ks and IRAs, to helping companies provide health insurance. There are even some who believe that those child tax credits help foster family growth.

Where Desmond believes the IRS can improve is in its customer service, in assisting the 150 million people who file tax returns every year. Yet he notes that the workload of the IRS has increased in recent years while its staff has been reduced by almost 25 percent. (The New York Times published an opinion piece in late December that reduction of IRS staff has meant losses in revenue of at least 15-20 percent. It noted that IRS audits dropped 42 percent from 2010 to 2017.)

As he enjoys the coffee at Old Ebbit Grill, Desmond reflects on how far he has come. “My career would not be where it is today without UCSB.”